With control of the Senate up for grabs in Georgia, organizers aim to mobilize voters 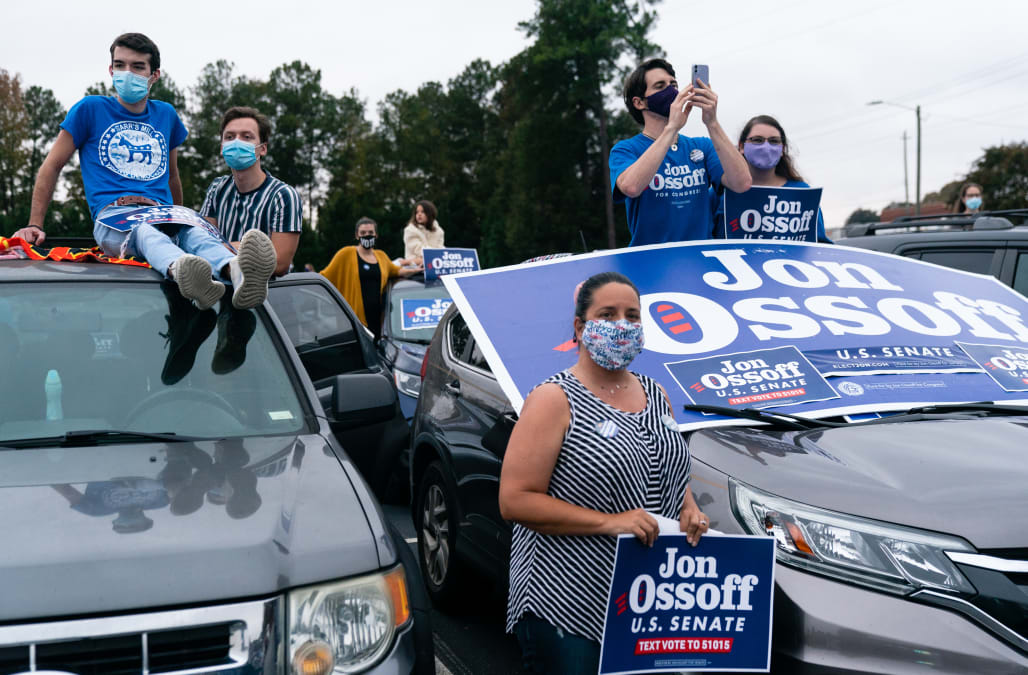 If Democrats can win a pair of Senate runoff races in Georgia in January, they will take control of Congress in addition to the White House next year. If not, Mitch McConnell’s Republicans will retain the Senate — and their ability to stifle any attempts at passing progressive legislation.

There’s a chance Democrats can win both races, but they’ll have their work cut out for them. Local activists, however, say they’re up for the challenge.

“Democracy is at stake in this election,” Deborah Scott, executive director of Georgia STAND-UP, a progressive activist group, told Yahoo News. “It’s so fitting that it’s happening right here in Georgia — a Southern state, a former slave state — and the base of it is Black women.”

Although Election Day is past and Joe Biden is the president-elect, there are still two Senate races left to deal with because in Georgia, a winning candidate has to hit 50 percent of the vote. Otherwise, the top two vote getters face off in a runoff election.

So in January, Republican Sen. Kelly Loeffler will have to fend off a challenge from Democrat Raphael Warnock, the senior pastor of Ebenezer Baptist Church in Atlanta, where Martin Luther King Jr. once pastored. Meanwhile, Republican Sen. David Perdue will attempt to keep his seat against Democrat Jon Ossoff, a 33-year-old former House candidate who’s proved to be a skilled fundraiser.

Perdue, who was elected in 2014, is up for reelection for the first time. Loeffler, a 49-year-old businesswoman, GOP megadonor and co-owner of the WNBA’s Atlanta Dream, was appointed to her seat by Georgia Gov. Brian Kemp earlier this year after Sen. Johnny Isakson retired due to health problems.

The fact that Democrats have even a chance of winning one or both of Georgia’s Senate seats is itself a triumph of activism. In particular, former gubernatorial candidate and state House Minority Leader Stacey Abrams has been praised for registering some 800,000 Georgians to vote in this year’s election, and is still raising millions of dollars to help push Ossoff and Warnock across the finish line.

“Stacey is the architect of how we are where we are in Georgia,” DuBose Porter, the former chairman of the state Democratic Party, told Yahoo News earlier this month.

Scott, the progressive activist, agreed with that assessment.

“I love Stacey and I support what she’s doing, and we’re glad that she’s able to bring the attention to such an important issue,” Scott said. “So we’re excited about that, and we see the impact. But we have some base-building organizations that have been here for 10, 15, 20 years and have been working on building the base. Because not only do we do voter registration, we do voter education and leadership development.”

The presidential race in Georgia hasn’t been called yet, although Biden had a slim, 14,000-vote lead there as of Wednesday afternoon. But earlier in the day, Georgia Secretary of State Brad Raffensperger, a Republican, announced there would be a full recount of the 5 million votes cast in the state’s 159 counties. The vote would have to be finished by Nov. 20.

Raffensperger announced the recount after Loeffler and Perdue released a joint statement calling on him to resign, citing “failures” in the election process they could not provide evidence for. In response, Raffensperger defended his office's handling of the election and refused to resign.

While that fight works itself out on the Republican side, Scott says Democrats are attracting out-of-state supporters looking to help Warnock and Ossoff.

“When we look at what’s going to happen over the next nine weeks, we know that there are going to be a lot of people that want to come to Georgia and they want to help,” said Scott. “And the reason they want to help is they see that this is a moment in time that they can actually make a difference in their democracy and even in their volunteerism.”

“You have these two Senate seats that will really hold the balance of power for the Senate,” Scott continued. “And so if everything happens in Georgia, and people actually turn out, then we can actually shift some of the progressive policies that need to be in place.”

Helen Butler, the executive director of the People’s Agenda, another progressive advocacy group, told Yahoo News that much of their work has to do with educating voters about which candidate would be best for them.

“We just want people to participate and select the candidate [that will serve their interests],” Butler said. “We all have a voice, and the majority of the voice should decide what happens in our communities, and the only way that happens is when people participate in our electoral process.”

Butler added that people in Georgia are realizing that the only way to create real change is to vote. Georgians have until Dec. 7 to register to vote in the runoff election, and early in-person voting will begin a week later, on Dec. 14. The runoff election will then be held on Jan. 5.

“Everything you do in life, public policy impacts it,” said Butler. “Dr. King talked about ‘Give us the ballot,’ and in that speech he said protest is important, but he also said you have to connect your civil disobedience to the ballot box. I think everyone made that connection.”

From now until January, millions of dollars in fundraising money will be pumped into both elections and campaigns will be targeting communities that may have not always been given a voice. But activists like Scott say that, regardless of who wins in January, their work will be far from finished.

“So after the election, we will go back into holding elected officials accountable,” Scott said. “We go right into the mayor’s race next year. So what we’re asking people to do is to support groups that will be on the ground and be here working on multiple level issues every single day.”

4
5 Facts On Detoxes and Cleanses