Joe Biden will have a long list of economic fixes to make: Experts say these are the top 3 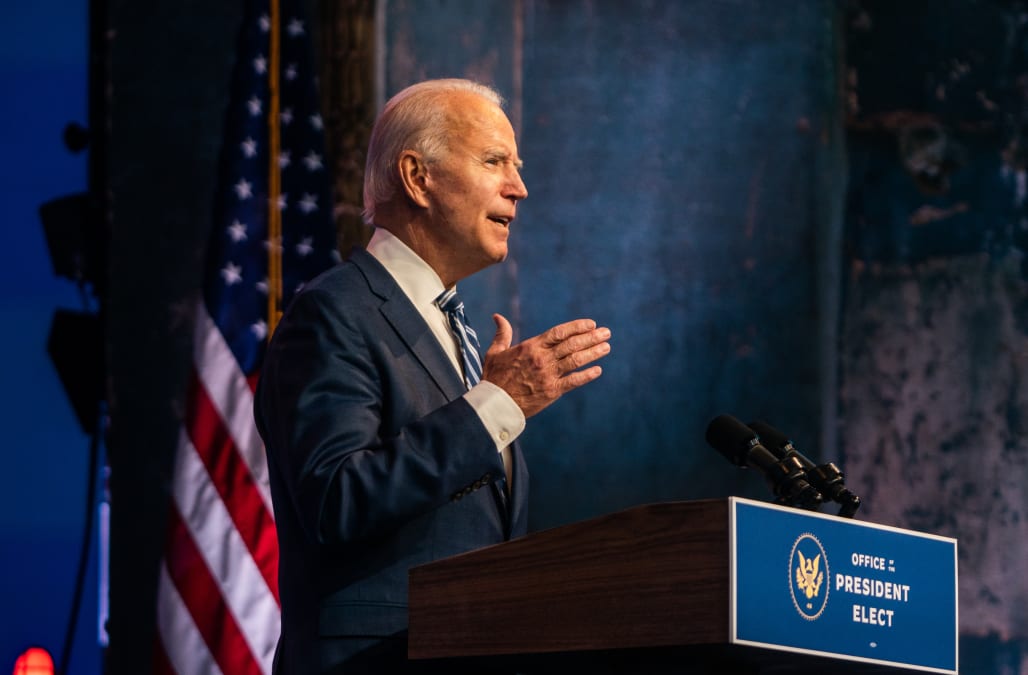 Economists and market analysts say that when President-elect Joe Biden takes the oath of office in January, he will inherit a battered economy. While most metrics of economic activity have risen from the record-shattering lows they hit in March and April, the pace of improvement has slowed, and analysts worry that burgeoning Covid-19 case numbers will throttle the hard-won economic momentum the country has eked out so far.

It won’t be easy. Control of the Senate is still up in the air, but many believe it’s likely that Congress’s upper chamber might still have have a Republican majority with Sen. Mitch McConnell, R-Ky, as Majority Leader. Although Biden has referenced his work with McConnell in the past to bolster his credentials as a politician who can successfully work across the aisle, McConnell’s public backing of President Donald Trump’s refusal to concede on Monday was, if nothing else, a clear indication that bipartisanship will be elusive for Biden.

“With a divided Congress, a handful of the major legislative priorities of a Biden administration seem unlikely,” said Ross Mayfield, an investment strategy analyst at Baird. “Any kind of major corporate tax hike or wealth tax seems incredibly unlikely with a Republican Senate.”

"Pfizer's progress towards a vaccine is promising, but does not negate the need for lawmakers to act in the near term."

Despite Biden positioning himself as a centrist, economists aren’t expecting much across-the-aisle cooperation. After a stimulus deal is passed, “I think it’s going to be difficult to do much beyond that, legislatively,” said Mark Zandi, chief economist at Moody’s Analytics.

Although Biden will be unable to put most of his — and his party’s — boldest initiatives into action, Zandi said the new president would likely implement a flurry of executive orders, many targeted at undoing policies Trump had unilaterally imposed the same way. “Biden’s going to reverse Trump on trade, on immigration, on climate change, on banking regulations," he said. “It’s not big, fundamental shifts… it’s more incremental.”

Economists say these are the week-one, day-one challenges Biden will face as soon as he is sworn in — and how he might be able to meet them.

Although a public health crisis first and foremost, experts agree that containing and lowering the burgeoning number of Covid-19 cases is the only way to alleviate the economic crisis that has gripped the country since March. Getting the virus under control will ensure that stores, restaurants, hotels and entertainment venues can stay open, and that Americans will have the confidence — and the disposable income — to take flights, attend ball games, eat out at restaurants and shop in stores.

“He’s going to encourage the governors to recommend that face masks be mandatory in order to try and improve the chance of the economy opening as quickly as possible,” said Sam Stovall, chief investment strategist at CFRA Research. “I think everybody realizes that more action is needed.”

His administration will need to invest in people, equipment and technology to improve the availability and accuracy of testing, production and dissemination of PPE and development of virus-mitigation and contract tracing protocols — all goals endorsed by public health officials. However, observers caution that Biden could run into resistance from Republican Congress members and governors over issues such as mask mandates and increased funds for testing and contact tracing.

Congress was unable to come to an agreement on the terms of a stimulus package before the election. Economists are divided on whether or not — and when — another tranche of aid might be forthcoming. “Any kind of coronavirus fiscal stimulus legislation still seems likely, [but] some of the good recent economic data shows economic momentum that has pared the appetite for a big bill,” Mayfield said.

Most analysts, along with top officials like Federal Reserve Chairman Jerome Powell, do agree that additional stimulus is needed. The progress announced by Pfizer on Monday towards a Covid-19 vaccine was promising, some said, but did not negate the need for lawmakers to act in the near term.

“Regardless of the path of the virus, I think there's pretty high awareness across the partisan spectrum that there needs to be some sort of bill to carry this recovery across the finish line,” Mayfield said.

A worsening public health picture could incentivize lawmakers to work quickly, some said. “Majority Leader McConnell’s reluctance to move ahead with a relief bill the last few months suggests it will be uphill sledding — though one might note that many experts expect the pandemic to be considerably worse by the time Biden is sworn in, which may make the politics of a broad relief and recovery effort somewhat more feasible,” said Mason B. Williams, a political science professor at Williams College.

A growing number of job losses are shifting from temporary to permanent, an ominous change labor economists say will get worse between now and the inauguration, particularly if the current alarming trajectory of case growth continues unchecked.

Economists agree that, even if a Biden White House is able to get a sufficient handle on Covid-19 to avoid reimposition of shutdowns, Americans will need the means as well as the willingness to spend. Securing more stimulus is an important first step, Stovall said. “He would want to focus on stimulus right away to save as many jobs as he can,” he said. With consumer spending the biggest contributor to GDP, putting money in the pockets of ordinary Americans is a quick way to insulate the jobs of countless cashiers, cooks, hairstylists, hotel staffers and others in high-contact service-sector positions.

Mayfield said another way Biden could contribute to job gains would be to coordinate more PPE production at American factories. “I think you’ll probably see some effort on some things like utilizing the Defense Production Act to mobilize some U.S. manufacturing,” he said. This would have a multifaceted impact touching on a few different Biden administration priorities: Adding jobs, securing enough PPE to combat Covid-19 and revitalizing American manufacturing with an eye towards rebuilding.

Although hailed by some as a proactive way to tackle the nation’s considerable public health as well as economic challenges, this proposal would likely face resistance from Congressional Republicans. Likewise, Biden’s proposals to develop jobs in sectors as diverse as infrastructure, green energy and child- and elder-caregiving all would require the kind of spending outlays he would be unlikely to wrest from a GOP-led Senate.

Milestones: A look back at AOL's 35 year history as an internet pioneer