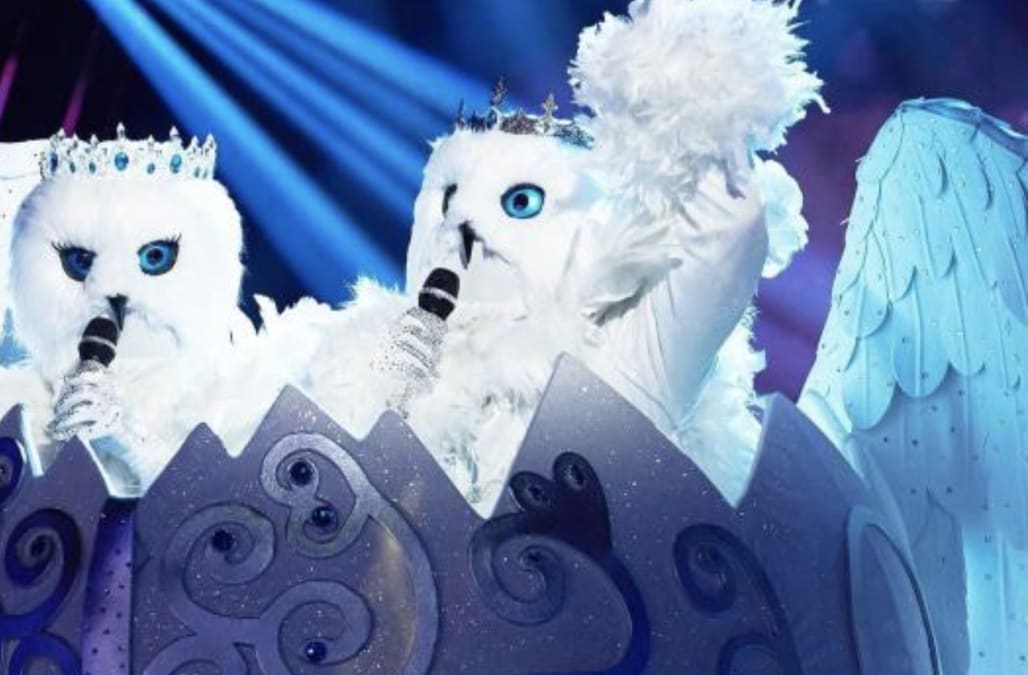 While the Country Music Association Awards were controversially going forward on the ABC network Wednesday despite a couple coronavirus scares, over on Fox there was a much more responsible, totally masked competition, The Masked Singer, between a famous Nashville couple and a former country child star. The latter, the Sun, is (spoiler alert!) most likely LeAnn Rimes. But more on her later. But we do know for sure, after this week’s Group A finals, that the eliminated Snow Owls are the Country Music Association’s 1990 Male Vocalist of the Year, Clint Black, and his wife of 29 years, actress/singer Lisa Hartman Black.

The first duo to compete in Masked Singer history, the Hartmans sounded exquisite harmonizing on “The Prayer” and later during what host Nick Cannon called the series’ first “love ballad smackdown” against the Popcorn on “Because You Loved Me.” But in the end, their gimmicky (yes, gimmicky even by Masked Singer standards) hydra-headed/conjoined-twin/Cinderella-egg-carriage costume was too cumbersome, and it kept them from performing at the same level as their competitors. (This was especially noticeable during the episode’s opening group number of P!nk’s “Raise Your Glass” — which had the Popcorn and Sun making full use of the stage, while Clint and Lisa were stuck in their bedazzled cracked egg like Derek Smalls in a malfunctioning Spinal Tap pod.)

But Lisa had loved being a Snow Owl, telling the judges, “When I first saw the costumes, I actually cried, because they were so beautiful but also so sweet. I couldn’t wait to get into them.” Nicole Scherzinger, the only judge to guess the Owls’ identity correctly, gushed, “Y’all were truly the heart of this show,” and she urged them to release new music together (probably not coincidentally, they just dropped a new duet single); Jenny McCarthy-Wahlberg called them “the lovebirds” of The Masked Singer. Clint, moved by their kindness, continued this lovefest by telling the judges, “You guys were no Simon Cowell!”

So, the Sun and Popcorn advanced to the Season 4 semifinals, where they will eventually compete with the survivors from Groups B and C. Whooooo are the Sun and Popcorn? It’s pretty obvious by now… but let’s assess this week’s performances and clues, just to make sure.

The Sun, “Piece of My Heart”

I don’t quite understand why there were S&M centaurs onstage, looking like four-legged backup dancers from Iceland’s Hatari performance at Eurovision. But not even that leather-harnessed spectacle could distract from this sun goddess’s radiant vocals. Judge Robin Thicke was especially impressed with her “sultry” rock ‘n’ roll performance, saying it was on a “whole other dimension.”

The clues: The Sun’s “Sol Mate” talked about taking road trips in their RV, and there were also Christmas-angel windchimes, cows, and a mention that the Sun has recorded at least one single that was certified gold. Past episodes’ clues have referenced child stardom, early career burnout, “ugly rumors,” depression, “dirty feet,” and Zenning out in a “sanctuary.”

My guess: Jaded guest judge Niecey Nash didn’t think the Sun is a married woman, because the Sol Mate just seemed too in love to be a typical husband! (Apparently Niecey was not as moved as the other judges were by the Snow Owls’ above-mentioned display of masked marital bliss.) But I am convinced that the Sol Mate was LeAnn Rimes’s still-smitten husband and Northern Lights holiday movie co-star, Eddie Cibrian — and that the Sun is therefore LeAnn. The country-crossover singer is an RV enthusiast; her debut single “Blue” went gold; she released her first album at age 13; she’s been tabloid fodder for years; and she’d about to release an album inspired by her meditation practice, CHANT: The Human & The Holy. This outlook is as clear as a sunny day.

Jessie J songs are not easy to sing, but the Popcorn got it poppin’ and totally pulled it off. Robin was shocked to hear a new dimension to her voice, in an entirely higher register, gasping, “You just flipped the script” and admitting that he was suddenly more confused than ever. But after this week’s clues package, I felt less confused and 100 percent secure in my guess.

The clues: The Popcorn’s best friend is a “Queen” famous for her karaoke parties, and she has actually been on The Masked Singer herself. We also saw a Russian doll and a stuffed-animal deer. Past clues have included a hair crimper, hoop earrings, a Rubik’s Cube, a rainbow flag, and mentions of overcoming “severe anxiety” and a “bizarre condition.”

My guesses: I guessed a couple weeks that this is Taylor Dayne, who has battled anxiety, agoraphobia, and bulimia; is a lady of the ‘80s and a fierce LGBTQ+ ally; and has been known to rock some seriously crimped hair. But the BFF clue sealed the deal: Taylor’s bestie is King of Queens star, karaoke obsessive, and onetime Masked Singer guest judge Leah Remini. Also, Taylor got her start as a singer in a Russian nightclub. So, all of these clues are telling to my heart that it is her.

More from Yahoo Entertainment Video:
'Sopranos' star Lorraine Bracco discusses the show's most controversial storyline
'Bachelorette' contestant walks out following strip dodgeball game: ‘I'm ashamed to be associated with you’
Kim Kardashian tells David Letterman she was warned 'Don’t you dare step foot in that White House or your reputation is done'