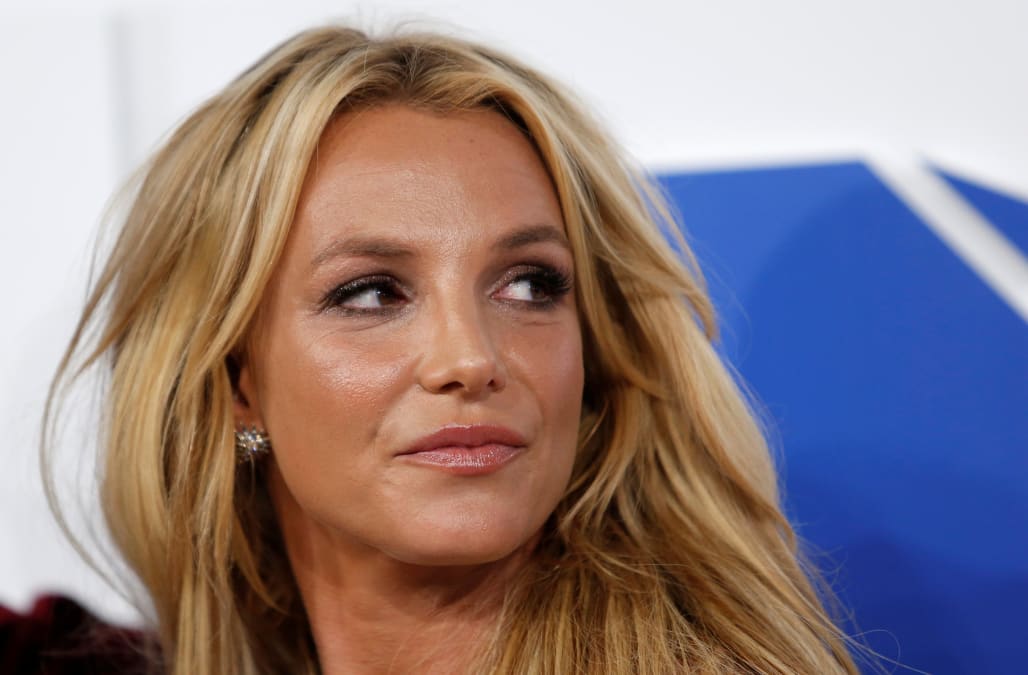 Pop star Britney Spears’s bid to remove her father James Spears from the conservatorship of her estate has suffered a temporary setback with a Los Angeles court declining the application.

James Spears has been her co-conservator since 2008, when the singer suffered a very public breakdown. He became sole conservator in 2019 after attorney Andrew Wallet resigned from his co-conservatorship.

In a hearing on Tuesday, Los Angeles superior court judge Brenda Penny declined to suspend James Spears from his conservatorship, though she did not rule out future petitions for his removal or suspension.

Britney Spears' dad Jamie Sppears
Singer Britney Spears (2nd,L) and family (L-R), father Jamie, brother Bryan and mother Lynne celebrate with Jamie Spears's partners (not shown) George and Phil Maloof and John Decastro, at the launch party for their new Palms Home Poker Host software held at the one of a kind Hardwood Suite at the Palms Casino Resort in Las Vegas. (Photo by Chris Farina/Corbis via Getty Images)
(EXCLUSIVE, Premium Rates Apply) Britney Spears's family: Jamie Spears, Bryan Spears, Jamie-Lynn Spears, Britney Spears and Lynne Spears (Photo by KMazur/WireImage)
Britney Spears Los Angeles October 10 2008 Britney Spears , with the help of her father Jamie Spears , pick up her sons from a school in Encino ID 19451912 (Photo by Philip Ramey/Corbis via Getty Images)
Britney Spears' father, Jamie Spears leaves the Los Angeles County Superior courthouse on March 10, 2008. The divorce between Spears and Kevin Federline and their battle for custody of their children has already cost the singer about a million dollars, Spear's lawyer Stacy Phillips said on March 10, 2008, and called on the presiding judge in the case to limit the allowance Spears has had to give Federline to pay his lawyers to 175,000 dollars, warning she was not an "open checkbook." AFP PHOTO / VALERIE MACON (Photo credit should read VALERIE MACON/AFP/Getty Images)
U.S singer Britney Spears arriving with her father Jamie for a rehearsal of her concert live on the TV show "Good Morning America" on tuesday morning at the Big Apple Circus in New York, NY on December 1, 2008. Photo by Cau-Guerin/ABACAPRESS.COM (Photo by Philip Ramey/Corbis via Getty Images)
UNITED STATES - CIRCA 2002: Jamie Spears, father of Britney, helps out in the kitchen of Planet Hollywood during Superbowl hosted by his daughter to raise funds for charity. (Photo by Richard Corkery/NY Daily News Archive via Getty Images)
Robert Elliott, M.D., David Vandewater, Pesident and CEO of Ardent Health Services, Ken Melkus, board Member of Ardent Health Services, Bryan Spears, Britney Spears, Jamie-Lynn Spears, Critlin Adams, Lynne Spears, and Jamie Spears (Photo by Kevin Mazur/Wi
BEVERLY HILLS - FEBRUARY 23: Britney Spears has a dinner date with her father Jamie Spears at Maestro's Steak House on February 23, 2008 in Beverly Hills, California. Britney Spears' presence caused quite a media stir, the photographers had to be held back by security. (Photos by Hector Vasquez/BuzzFoto.com) ***FEE MUST BE AGREED PRIOR TO USAGE *** Buzz Foto LLC http://www.buzzfoto.com/ 1112 Montana Ave suite 80 Santa Monica CA 90403 1 310 441 4464 1 310 980 8822
(EXCLUSIVE, Premium Rates Apply) Britney Spears's family: Jamie Spears, Bryan Spears, Jamie-Lynn Spears, Britney Spears and Lynne Spears (Photo by Kevin Mazur/WireImage)
Up Next

“My client has informed me that she is afraid of her father,” Britney Spears’ attorney Samuel D. Ingham III told the judge. “She will not perform again if her father is in charge of her career.”

Meanwhile, financial company Bessemer Trust has been appointed as a co-conservator.

James Spears’ attorney Vivian Thoreen argued that under her client’s conservatorship, Britney Spears’ net worth has come out of debt to reach $60 million.

Britney Spears began proceedings to remove her father from the conservatorship in August. In October, she won the right to expand her legal team.

Earlier this month, she posted a video to her Instagram page where she said: “Hi. So I know that there have been a lot of comments and a lot of people saying a lot of different things about me, but I just want to let you guys know that I am fine. I’m the happiest I’ve ever been in my life. I’m sending all of you guys a lot of prayers, wishes and a lot of love.”